In our opinion, the goal of Hacker News (HN) is to find the highest quality submissions (according to its community) and show them on the front-page. While the current ranking algorithm seems to meet this requirement at first glance, we identified two inherent flaws.

Let’s look at these two issues in detail and try to confirm them with data and some systems thinking tools. All HN submissions are available on BigQuery, which we access via this Kaggle notebook. You can find the SQL queries for reproduction and further exploration in the Appendix.

Number of Upvotes does not Correlate with Quality

We don’t have a good definition for quality, except that users upvote submissions which they think are of high quality. But even high quality submissions get an inconsistent amount of upvotes. We have some data to back up this claim. Since HN allows URLs to be submitted multiple times, we can look at how many upvotes every submission of the same URL received. Note that submissions need at least two upvotes on the new-page to appear on the front-page and every submission starts with 1 upvote (submitters upvote). The number of upvotes is called score in the dataset. Let’s look at URLs which have been submitted at least four times with the same title during 30 days where every submission got enough votes to show up on the front-page:

We observe that the scores are inconsistent. Only a few submissions score high. The low scores are a bit surprising because all submissions got enough votes to make it to the front-page. The high scores indicate that the community perceives these submissions as high quality. But these high-quality URLs have been submitted several times and received different, mostly low scores.

We observe that even for submissions submitted at the same time-of-day, the scores are inconsistent. This means that in general, score does not correlate well with quality. And we conclude that a low score of a single submission is not a good indicator for low quality.

For a submission to be shown on the front-page, it needs to receive at least two upvotes (in addition to the submitter’s vote). But most submissions don’t get any upvotes at all. Here is a distribution of upvote counts for all submissions on Hacker News. Take minute to understand how to read the first two columns of this table. They answer questions like: How many submissions received between 3 and 4 upvotes?

We observe that almost half of all submissions did not get any upvote at all (score = 1). It’s also interesting to see that most votes get absorbed by few submissions which are on the frontpage (score 64-1024).

But are these submissions just spam and low-quality submissions? Let’s have another look at the data and see if there are high quality URLs which have a submission without an upvote.

We observe that there are indeed very high quality URLs that have been overlooked at least once on the new-page. This means that zero upvotes do not necessarily mean low quality. Zero upvotes mean uncertainty. But this uncertainty looks the same as low quality for the ranking algorithm and therefore gets penalized. This analysis shows that we do have false negatives with potential high quality among our zero upvote submissions.

Why does this happen?

Explaining the score inconsistency for submissions that all appeared on the front-page is a bit more complicated. Let’s understand the current ranking algorithm first.

The new-page is showing the latest submissions, ordered by submission time. To calculate the front-page, the algorithm takes the newest 1500 submissions which have at least two upvotes, applies the ranking formula and sorts by the resulting value. Here is the formula:

We define a view as a click by a registered user on a submission, so the user sees the submitted content. For Ask HN, the content would be the comments page. We only look at registered users, because these views are the only ones that can lead to more upvotes.

If many submissions compete for upvotes, the positive feedback loop creates a rich-get-richer phenomenon. Submissions with an already high number of upvotes are likely to get even more upvotes than others.

Every user acts on their own and decides when to visit the front-page and which submissions to vote on. If we imagine thousands of users looking at the front-page, the views and votes on the ranks follow a distribution where higher ranks receive more views than lower ranks. The graphic was created using the Hacker News API and observing score changes over time for every rank.

Let’s imagine the just mentioned front-page in combination with those thousands of users, viewing and voting on the individual ranks. The first vote hitting a random rank increases the upvote count of that specific submission and pushes it to the top of the list. Now, that submission has a higher chance of receiving even more upvotes, but only because it received an upvote early.

If we run a second experiment and the first vote randomly hits a different rank and submission, then that specific submission has a better chance to get more upvotes. After many votes the ranking stabilizes and the high ranking submissions stay at high ranks while the lower ranked ones stay at lower ranks, without any chance to reach a high rank again.

With submissions submitted at different points in time, the age penalty kicks in and pulls stabilized random submissions back down. This allows other random rich submissions to exploit their feedback loop, get richer, and move up to higher ranks.

Now let’s put everything back together and imagine submissions with different qualities on the front-page. A higher quality submission sitting on the same rank as a lower quality submission should get slightly more upvotes, because more users identify its quality and vote on it. But in reality, two submissions cannot have the same rank. One of the two submissions is ranked higher and therefore receives more views and upvotes. The difference in quality is not strong enough to outperform the different amount of votes coming in on different ranks.

This means, that despite differences in the quality of submissions, random submissions rise to the top of the front-page. Therefore, the number of votes does not correlate with a submission’s quality. This is a very strong claim. Additionally to the data shown before, we’re working on confirming this claim with a simulated front-page and will write about it in the future.

How can the Ranking Algorithm be Improved?

We’re working on alternative solutions with the following goals in mind:

The core idea of our approaches is to balance the positive feedback loop, such that instead of the rich getting richer and rising to the top, the highest quality rises to the top.

There are many ways to do this. In our opinion, the following is the most promising one that can be implemented in Hacker News:

This can be achieved by normalizing the current ranking formula with the number of views:

To understand why this works, imagine two submissions with the same number of upvotes and a different number of views. The article with more views probably has a lower quality than the one with fewer views, because more people have viewed it without giving an upvote. So the ratio of upvotes and views is a signal of quality.

By adding / views to the formula, it contains exactly this ratio. Sorting by this ratio moves high-quality content to higher ranks. And at higher ranks, submissions get more views and upvotes, so the ratio becomes more accurate and converges. This makes the ratio comparable and thus a good indicator of quality. Interestingly, higher ratios will also have more upvotes, because of the ranking. And that is exactly what we are after: The number of upvotes correlates with quality.

This would solve the problem of correlation between upvote and quality on the front page. But high quality submissions can still be overlooked on the new page (false negatives).

The purpose of the new-page is to act as an initial filter and separate good from bad quality submissions. To achieve this goal, the new-page should expose every submission to a certain amount of views, to estimate its eligibility for the front-page.

We want to verify with simulations, if our proposal indeed meets the goals of Hacker News. In addition to that, we want to try other algorithms and see how those compare. Simplified proof of concept simulations already confirm that it’s working as described.

Here are a few plots of our early, simplified simulations. In these simulations, all submissions are shown immediately on the frontpage and ranked by the formula. There is no new-page. Submissions have a predifined uniform random quality between 0 and 1. Random agents with an expectation threshold look at the frontpage and vote on submissions based on their quality. The agents look more freqently at higher ranks.

Please keep in mind that these simulations have simplified assumptions that do not correspond to reality. For example, the quality distribution is uniform and the vote distribution does not follow that of the real front page. The plots are there to show that our ideas can work. And we are currently working on creating better simulations. 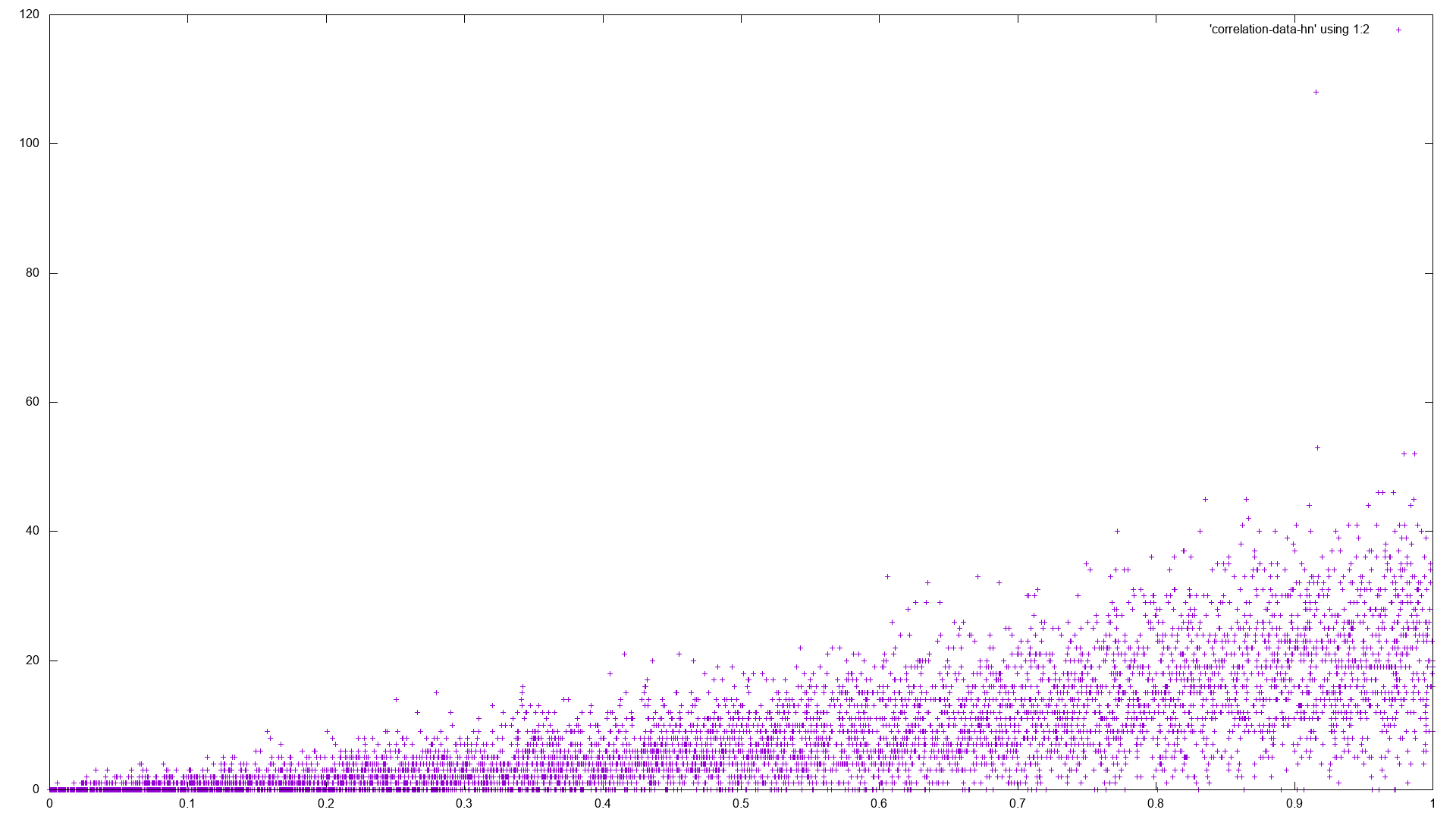 Every point is a submission that went through the frontpage simulation. The x-axis shows its predefined quality and the y-axis its upvotes. We can see that higher quality content has the chance to reach higher scores. There are no false positives (low quality content with high score), but there are many false negatives (high quality content with low score). Some outliers have very high scores.

If we use our proposed formula which divides the scoreRank by views, we get the following: 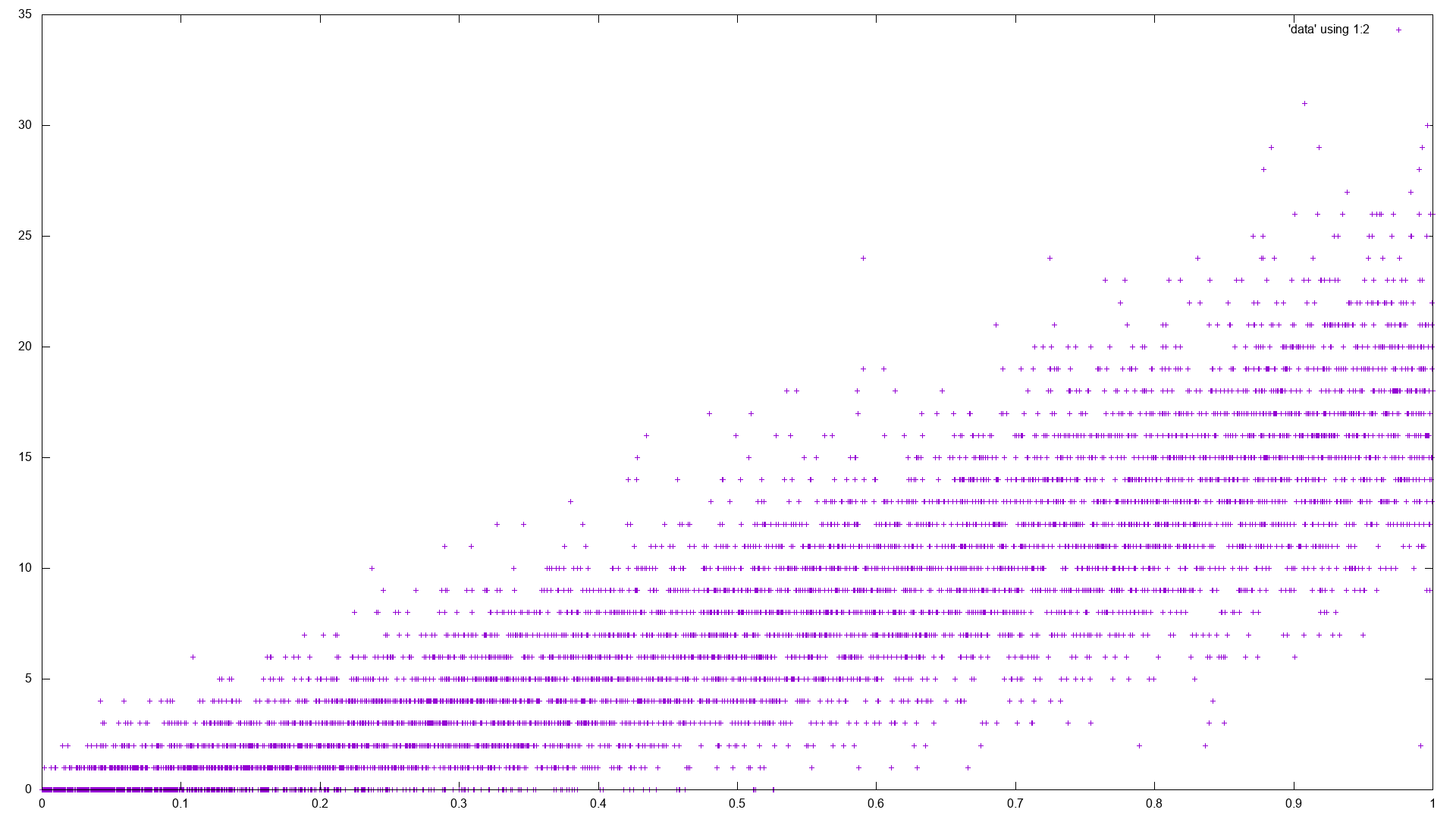 Now there are basically no false-negatives (high quality with low score) anymore and the upvotes correlate much better with quality.

We proposed a small modification to the Hacker News ranking formula, which turns the positive feedback loop into a balancing feedback loop: Dividing the result of the formula by the number of views a submission receives.

We already evaluated the effectiveness of this approach with oversimplified proof-of-concept simulations. And the results are quite promising. But there’s more work to do. Currently, we’re working on a more realistic simulation with the goal to behave the same as Hacker News in reality - including a new-page. If we’re accurate enough, we can evaluate how different formulas change the resulting front-page. But more on that in the future.

Thanks for reading. We appreciate any feedback and ideas. We’re also looking for ways to fund our research. Please get in touch!

These queries can be run on the Hacker News Dataset on BigQuery. You can fork our Kaggle Notebook to start.

All scores of urls with multiple submissions

Note: We understand that the standard deviation of time-of-day should ideally be calculated using a circular mean, but we wanted to keep it simple.

For example: How many submissions got between 3 and 4 upvotes?

We also experimented with other balancing feedback loop formulas, that have interesting properties: 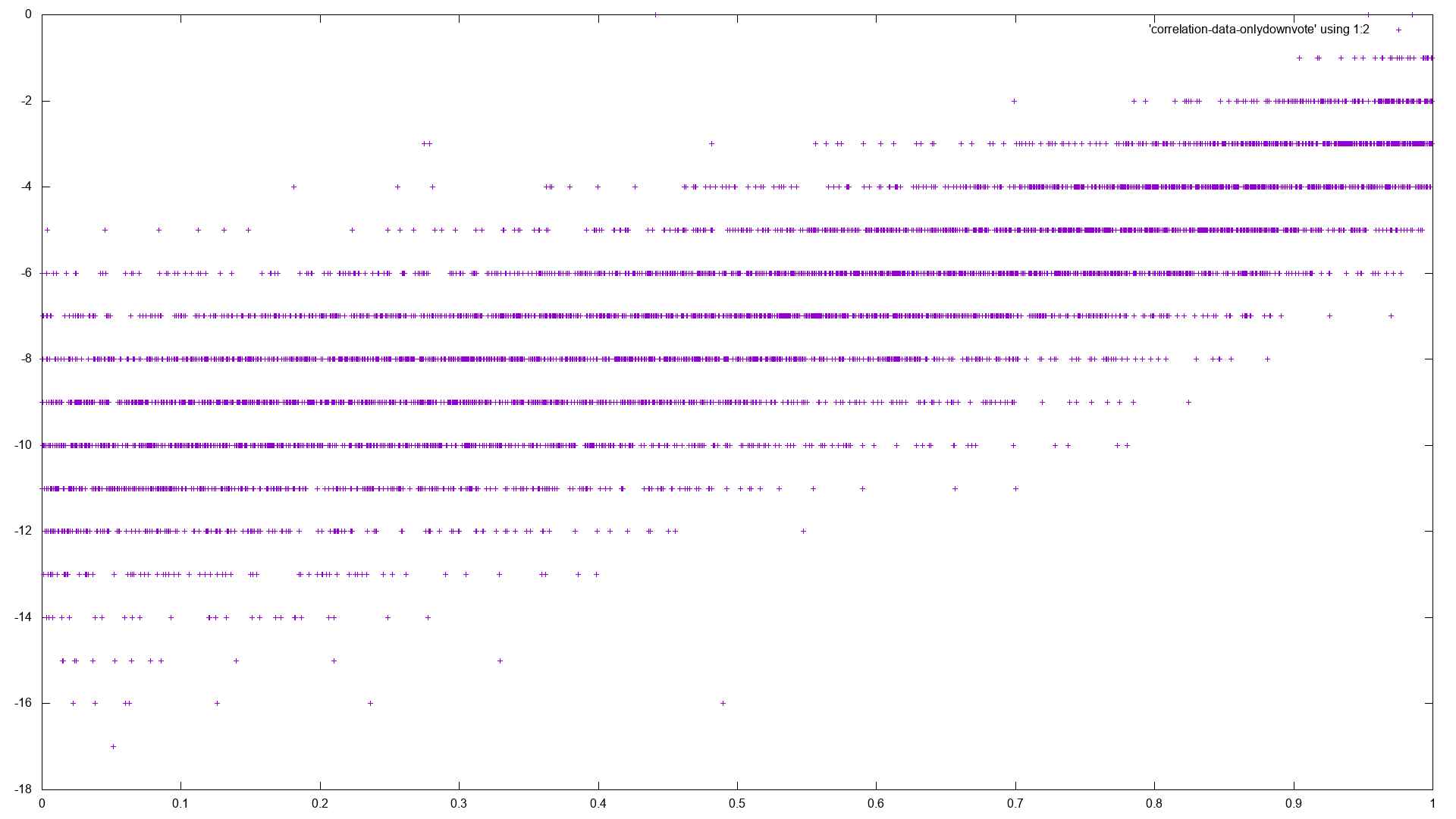 Only having downvotes has very interesting properties. It’s much harder to promote your own content. Also, uncertainty (few votes) gets more attention (higher rank) instead of less, like it does for upvote based systems.

Upvotes with views as downvotes 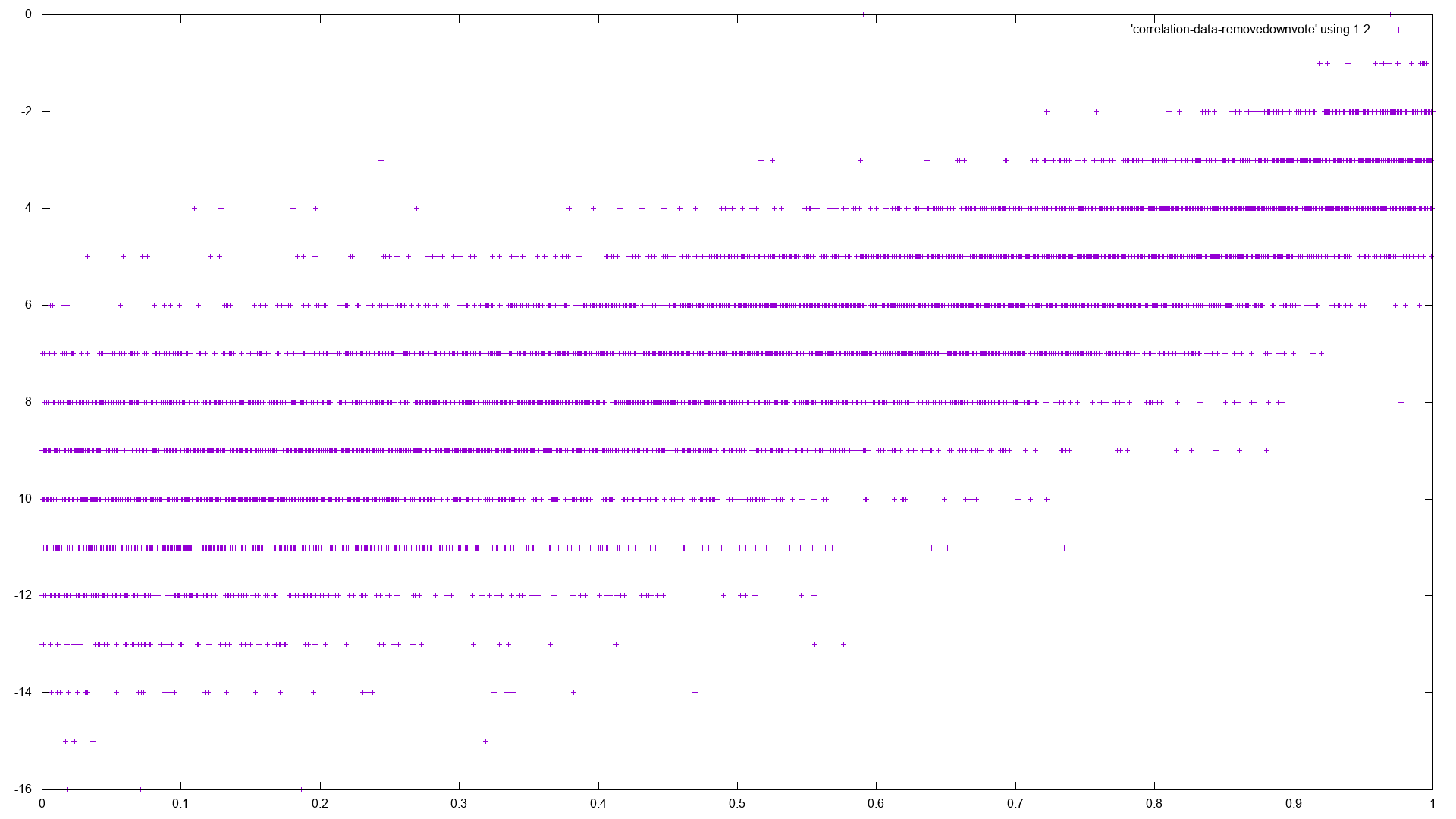 Interestingly, this formula seems to behave very similar to the downvote-only formula. Even though the users still have an upvote button.